You Would Never Guess the Price of Bugatti's New Bike

And no.. I'm not talking about a motorcycle bike, I'm talking about a riding bike. Bugatti partnered with luxury bike manufacturer PG to create this bike which they call, the PG Bugatti bike.
This bike is weighed in at 11 pounds. How? Over 95% of the bike is made of carbon fiber, which makes it seem weightless. They also included a shock absorbent bar, which makes it firm, and aerodynamic tubing for high speeds.

Customers who purchase this bike have the ability to customize the leather and the color of the paint however they would like. This bike is not made for riding around the neighborhood block filled with potholes, but it is being sold as a sport bike.

With how awesome this all sounds, unfortunately, you probably won't see it in the streets. You'll probably find it in someone's garage locked up with 20 different combination locks with plastic over it. Thats understandable considering there are only 667 units being made. 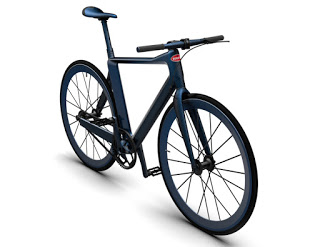